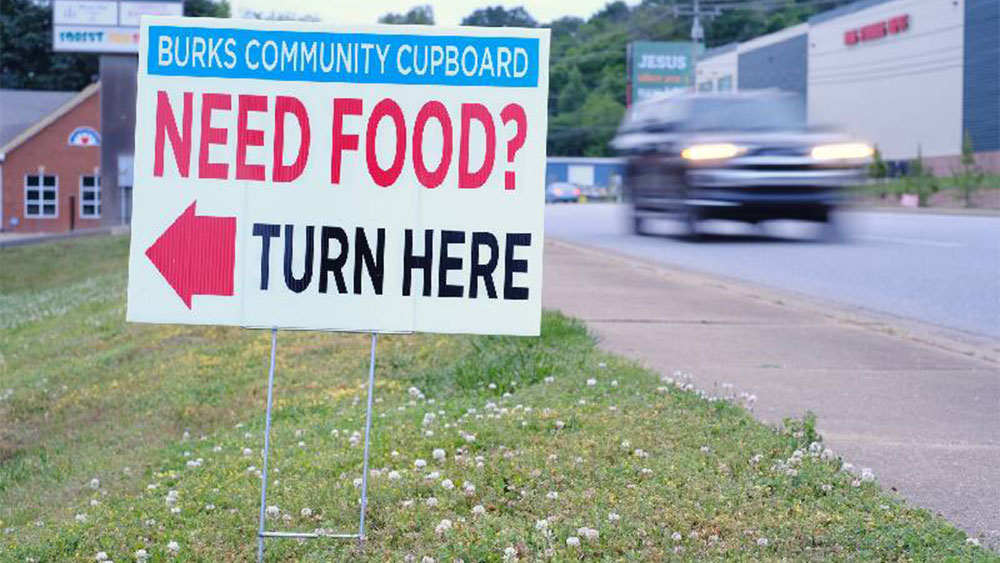 Food insecurity remains at high levels across the Southeast as the economic effects of the COVID-19 pandemic continue. In response, some Chattanooga area churches and community groups are stepping up to provide staples for local families.

In April, Burks United Methodist Church in Hixson launched its “community cupboard,” a stand in the church parking lot stocked with non-perishable foods that is open to anyone in the area at any time.

Jan Ivey, missions coordinator for Burks, said the cupboard became a project for the church when the congregation saw local needs but could not necessarily get out into the community in the traditional, and often face-to-face, ways. The cupboard offers a variety of foods to get people through a rough patch, Ivey said.

Jennifer Fritts, who oversees grants and communications for the Chattanooga Area Food Bank, said all 20 counties the organization serves are experiencing elevated levels of insecurity. The pandemic put nearly 162,000 at risk of going hungry, she said, an increase of more than 15% compared to previous years.

“Unemployment has increased, groceries are at a 50-year high, disruptions in the supply chain are creating an economic crisis unlike anything since the Great Depression,” Fritts said in an email. “One in five of our neighbors in our service area may struggle with hunger this year.”

Catoosa and Whitfield counties experienced the largest increases in insecurity in Georgia, up 52% and 42%, respectively. Hamilton County experienced a jump of 43%, according to data from the Chattanooga Area Food Bank.

The level of food insecurity among children in Hamilton County increased by 65% in the past year, Fritts said. For Catoosa and Whitfield counties, the childhood rate rose by 69% and 57%, respectively.

Experiencing food insecurity can have long-term physical and mental health effects, particularly among children. Children who are food insecure have between two and four times as many health issues as other children in the same income level, said Dr. Deborah Frank, professor of pediatrics at Boston University, during a panel discussion hosted by the American Association for the Advancement of Science.

Food insecurity is not an abstract concept for medical providers, who see the negative health effects of it, Frank said.

The Brainerd Community Food Pantry has helped more than 2,700 households in around six months of operation, said Bess Steverson, who helped start the initiative. The pantry, which operates out of Brainerd United Methodist Church, distributed nearly 125,000 meals during that time frame, Steverson said.

The Brainerd pantry has a volunteer list of nearly 100 people, though Steverson said she expects more volunteers in the summer when school lets out.

Volunteers get to hear people’s stories and see that the needs often do not fit the stereotypes people may think of when they discuss food insecurity, Steverson said.

“People are looking for something good to do so they can make a difference in someone’s life,” she said. “When you see the people, and are serving those people in need, it really does make you feel like I’m making a difference in some small part. That’s what’s really been great about this pantry.”

In March, the Walmart Neighborhood Market on Shallowford Road closed after five years, effectively leaving the East Chattanooga and Brainerd areas without grocery options. The Brainerd area is among the areas with the highest levels of food insecurity in the county.

Steverson said the Brainerd pantry has not yet seen a noticeable uptick in numbers since the grocery store closed.

Fritts said full recovery from the effects of the COVID-19 pandemic could take years.

“We know the impact of this crisis will continue at a high level long after the story of hundreds of families seeking food assistance has left the public eye,” she said in an email. “The vulnerable populations who were food insecure or at risk of food insecurity before COVID-19 have been most impacted and are now facing greater hardship.”

Hamilton County residents can call 211 to be referred to a Chattanooga Area Food Bank partner.

Ivey said people can buy nonperishable food and stock the Burks UMC cupboard, located at the church at 6433 Hixson Pike. People also can drop off donations to the church or contact the church about volunteering, she said.

People interested in getting involved with the Brainerd Community Food Pantry can visit www.brainerdfoodpantry.com.